Knowledge is the key to acceptance. 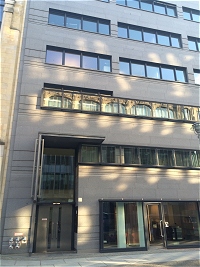 The Federal Foundation Magnus Hirschfeld was founded on 27th October, 2011, by the Federal Republic of Germany, represented by the Ministry of Justice. The Foundation’s headquarter is located in Berlin. Its name originates from Magnus Hirschfeld (1868-1935), a German doctor, sexologist and co-founder of the first homosexual movement in Germany.

The Foundation’s goals are to remind society of Magnus Hirschfeld, to support educational and research projects, and to fight against the discrimination of homosexuals in German society. The Foundation aims to enhance the acceptance of people with a non-heterosexual orientation in society; the same applies to people who don’t define themselves as only man or woman.

The Foundation’s work is based on three main branches: research, education and remembrance. The statute as well as the Research and Education Program define details of the Foundation’s purposes and tasks.

The Federal Foundation Magnus Hirschfeld also realises its own projects: their main focus lies on the research and remembrance of the persecution and repression of lesbians, gays, bisexuals, transgender, trans* and inter* (LGBTTI*) during National Socialism, co-operating with the Institute for Contemporary History Munich-Berlin (IfZ) and other co-operation partners.

The Foundation supports the research on sexual and gender diversity. This aims to open up perspectives for social, health, political and historic sciences as well as sexual and cultural sciences and psychology. Included in here are current men’s and women’s studies. The Foundation wants to give impulses and build up networks. It also aims to support the work of archives and publications about the results of education and research programmes. Long-term goals are the establishment of a research database in co-operation with universities and archives as well as a scholarship programme of the Federal Foundation Magnus Hirschfeld. Twice a year, the Foundation decides on funding. Moreover, the Foundation contributes input to the following fields of research:

The Foundation supports the research on the history of LGBTTI*, their discrimination, repression and persecution, their emancipation processes in society (e.g. the homosexual movements) as well as their daily life – primarily from the middle of the 19th century until now.

The Foundation supports the research on sexual and gender diversity, the living environments of LGBTTI* and the usefulness of the appreciation of diversity in economical, political, social and cultural contexts.

The Foundation aims to examine the relationships between different axes of identity – such as gender/gender identity, sexual orientation, social, ethnic and religious background, age and disabilities – and the process of stereotyping as well as the ideological correlation and interaction of the different categories. Moreover, the Foundation co-funds external research projects with equal purposes as the Foundation’s.

In addition to the research programme, the Foundation aims to initiate and support measures and projects of educational work dealing with LGBTTI* life in Germany, as well as the evaluation of such programmes. The implementation and co-operation of educational programmes in schools, youth and adult education and educational work focusing on sexual diversity aim to foster the acceptance of LGBTTI* at school and at the workplace.

The Foundation co-operates with the Foundation Academy Waldschlösschen in the educational field: They set up seminars and further education measures on the life of LGBTTI* together, realised within the Hirschfeld Academy programme.

One main project for the remembrance of lesbians, gays, bisexuals, trans* and inter* in Germany is the “Archiv der Erinnerungen” (archive of remembrance). This video archive is developed in co-operation with the Federal Länder (e.g. Berlin), archives, universities and other institutions and organisations. It unites the life stories of LGBTTI* who suffered directly or indirectly from the consequences of Paragraph 175 of the penal code in the early Federal Republic or from Paragraph 151 of the penal code in the former German Democratic Republic.

The co-operation project with the IfZ for the research of the persecution and repression of LGBTTI* has also been set up to promote remembrance and education.

The Hirschfeld Lectures are a series of scientific presentations and discussions set up by the Foundation – including a book series of these lectures published by Wallstein Publishing House. The Foundation organises its own workshops and conferences – e.g. about the persecution and repression of LGBTTI* or about the search for witnesses of those times (archive of remembrance). In November 2013, the Foundation holds the 1st LGBTI* scientific congress on “Same-sex life and experience”, which presents a broad variety of scientific research projects on sexual and gender diversity.

To achieve the aforementioned goals, the following three organs of the Foundation plan and organise the projects together: the Board of Trustees, the Chair and his team at the office, and the Advisory Board. President of the Board of Trustees is the Federal Minister of Justice in office.

The Board of Trustees takes the main decisions of the Federal Foundation Magnus Hirschfeld and oversees the management by the Chair. Members of the Board of Trustees are appointed or nominated by the German Bundestag, the five Federal Ministries and nine LGBTTI* organisations. Their work for the Foundation is voluntary. Decisions that are of fundamental importance for the Foundation require the consent of the Board of Trustees. This includes in particular: decisions on the fundamentals of the ‘research and education program’; the allocation of Foundation funds for research projects and educational work; the principles of asset management and important personnel actions.

To achieve its goals, the Foundation has established networks with strong co-operation partners. These are for example: The Institute for Contemporary History Munich-Berlin (IfZ), the Waldschlösschen Academy, the Magnus Hirschfeld Association, the Berlin State Office for equal treatment and against discrimination (LADS), and the Federal Anti-Discrimination Agency. The Wallstein Publishing House (Göttingen, Germany) publishes the Foundation’s series of Hirschfeld Lectures.

In times of low interest rates, the Foundation depends on donations, in order to achieve its ambitious goals. With your donation, you support science as well as education and research and their contribution to the remembrance of the LGBTI* persecution by the Nazis and the fight against discrimination of LGBTI* in Germany now and in the future. History repeats itself, as is currently demonstrated by the laws against homosexuals in Russia. Every generation needs to learn tolerance and acceptance.

TRANSPARENCY OF OUR WORK

Once a year, the Federal Foundation Magnus Hirschfeld presents an annual report. On our homepage and via social networks (e.g. Twitter and Facebook), with press releases, a press review and on our events all over Germany, we continually inform about funded and our own projects.