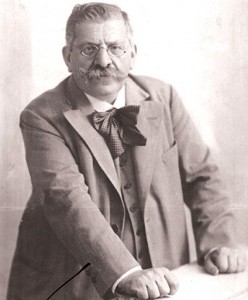 Magnus Hirschfeld (born 14 May 1868 in Kolberg, † 14 May 1935 in Nice), German physician in Berlin, sex researcher and empiricists, gay, socialist, a Jew, and founder of the world’s first gay rights movement (SHC).

“I […] may say that if homosexuals in Berlin are now granted such a unique restoration of life, it is mainly due to our enlightening movement, without wanting to be blamed for some of the excesses which have emerged over time.”

He certainly was not modest when it came to describing the impact of his work, as can be seen in this quote from an article in the Berlin’s gay magazine “Die Freundschaft” in 1922. Magnus Hirschfeld was able to convince the Berlin Criminal Police to believe that homosexuality is not an “acquired vice” but “ineradicable”, and the officials then realized that it’s easier to keep “inverts” under control if they are allowed to be out in the open. In this respect, as a physician and a recognized expert in matters of sexuality, he and his political associates in the “Scientific-Humanitarian Committee” (SHC) founded in 1897, did indeed play a role in the burgeoning homosexual subculture. But that was quickly stamped into the ground by the boots of the Nazis.

If one is to classify Hirschfeld using today’s terminology, one could say that he was a gay man who fully supported the concept of diversity. And he laid at least a small foundation for today’s Queer Theory, according to which, next to biological gender there are elements that are independent of societal norms that lead to a varied (sexual) identity of a person. However, the mortars for this foundation stone – a purely medical-biological categorization – have proven to be inviable. After the Second World War, Hirschfeld’s ideas were no longer relevant in sexology.

Until then, however, there was tireless work being done by means of empirical research on the theory of “sexual intermediaries”. Between 1899 and 1923 Hirschfeld and his staff compiled a 20,000-page anthology. The “Yearbooks For Sexual Intermediaries” were intended to show that between the “full man” and the “full woman” there are an infinite number of gradations and combinations. Hermaphrodites, transvestites, homosexuals are the necessary natural link between the two poles of man and woman. The homosexual is a kind of “third sex”. He founded the “Institute for Sexual Research” in 1919 in order to provide a solid framework for this research. However, it was also to become a center for counseling those who had problems with their sexuality and also housed an extensive archive of sexological literature. But on 6 May 1933, the Institute and its contents were destroyed by the Nazis in the wake of the book burnings. Hirschfeld had already gone into exile.

In addition to his work as a sexologist, Hirschfeld was also a sexual reformer. The Scientific-Humanitarian Committee, founded in Berlin on 15 May 1897 by Hirschfeld and the publisher Max Spohr, the lawyer Eduard Oberg, and the writer Franz Joseph von Bulow, wanted to achieve the decriminalization of homosexuality. The activities of the SHC were closely linked with Hirschfeld’s medical work, and later also with the Institute for Sexual Research. The most important goal was the elimination of Section 175 of the Penal Code, which punished sexual acts between men. A year after the foundation, a first petition was submitted calling for the abolition of Section 175, but without success. The SHC tried again in 1922 and 1925. A coalition of various sexual reformers actually succeeded through their lobbying work that the Reichstag Committee decided in 1929 to abolish the Special Criminal Law section. But the application did not reach the Reichstag in time. When the Nazis came to power, the application was dropped.

In Hirschfeld, the SHC not only had a prominent lobbyist, but also a public relations expert. His tireless production of newspaper articles, academic papers, journals and lectures provided for a significant presence, also outside of academic circles. He also recognized the effectiveness of a then new and modern media: The silent film “Different from the Others,” was produced by Richard Oswald in 1919 with Hirschfeld’s involvement. This “social-hygienic film” was the first to deal openly with homosexuality. Hirschfeld himself played in the film, holding a passionate plea in court against Section 175. The film sparked a fierce debate in politics and media, and was banned in 1920. Among the homosexuals who were able to see it in the cinema, it led to similar feelings of liberation as Rosa von Praunheim’s 1973 agit-documentary “It Is Not the Homosexual Who Is Perverse, But the Society in Which He Lives”

The destruction of the Institute of Sexual Research by the Nazis ended the career of “Aunt Magnesia”, as he was affectionately dubbed in the scene. Thus began an exile with stops in Zurich and Ascona, Paris and Nice. He died in 1935, on the very day of his 67th birthday.