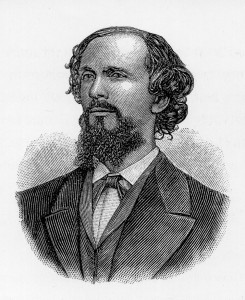 „The Uranian kiss can only grant a one-sided pleasure of love. I envy women for the Dionian kiss. My lover kisses me, oh, so coldly.“

Ulrichs was not a late bloomer. At 22 he was ready to assume the homosexuality he had felt since puberty. At the time he was working on his dissertation on the topic of the Peace of Westphalia. He wrote in Latin, the ancient language, which he spoke perfectly. But when the longing came that distracted him from his studies, he was at his wits end. Was it a „passive animal magnetism“, as he first suspected? Or, rather than mysticism, could science provide the answer? The lawyer developed his own theory: In nature, sexual attraction always moves between the pole of female and male, so the male homosexual must have a female soul in a male body.

Ulrichs initially took on the term coined by other authors, the „third sex“. Since at the time he had yet to encounter any lesbian women, he suspected the existence of a „fourth gender“ (a female homosexual with a male soul in a female body), but developed his own terminology as seemed appropriate. „Uranians“ were men who love men, the „Dionians“ are those whom we now call hetero. And the lesbians who fortunately later came into view were given the feminine form of Uranian – „Uranierin“.

Ulrichs‘ Uranian desires were put on record in 1854. He was investigated because, according to a rumor, he „pursued unnatural lusts with other men“. The former Hildesheim court assessor settled as a lawyer in Burgdorf, but even there people learned of the investigation. He lost his legal license and now worked as a secretary, foreign language teacher and journalist. This freelance activity allowed him the time to develop his theories on homosexuality. The career setback he suffered promoted his motivation to become politically active.

In 1864 the first part of twelve writings appeared: „Research on the Riddle of Male-Male Love.“ He came out openly as an „Urning“, and formulated demands, including the establishment of a Uranian Association and the creation of „Uranian marriage“ – a utopia that finally became a reality in 2001 with the introduction of registered partnership. Also on his agenda was the abolition of the penal laws against homosexual acts, which he represented before the German Lawyers meeting in Munich in 1867. He was shouted down by his colleagues.

In 1880 Ulrichs decided to go into exile in Italy, where he spent the rest of his life. The mood against homosexuals had deteriorated in the newly founded German Empire, and his goals remained unfulfilled. First in Naples and later in L’Aquila, he worked as an editor for a magazine for the preservation of the Latin language. By 1870 he had failed at his project to create a periodical publication for his target audience. Only one edition of „Uranus. Contributions to the study of the natural riddle Uranianism and the discussion of the moral and social interests of Uranianism“ ever appeared. However, Karl Heinrich Ulrichs did thereby assure his place in history books as the publisher of the first magazine for homosexuals.