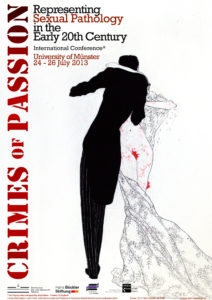 The conference „Crimes of Passion“ takes place between 24th and 26th of June in Münster. It focuses on intersections of sexuality, criminology and other cultural contexts, including literature, psychology, architecture, consumerism, and colonialism, just to name a few. Our group of international panelist comes from a range of disciplinary backgrounds. Within this interdisciplinary framework the conference will pursues specific questions about the early 20th-century discourse on perversions, passions, and crimes:

The discourse on sexual pathology claimed a central position in modern European culture almost as quickly as it began to establish itself as a scientific discipline. The bonds between science and culture seem all the more visible when it comes to the science of sexual deviance, as many sexual scientists were quick to point out in their works. Without empirical or statistical material at hand, the scientists turned to other sources of knowledge in order to legitimize and systematize sexual pathology. Their earliest case studies came from literature. Indeed, certain authors found themselves under examination, as sexual themes in their books were treated as evidence of pathological fantasies. These literary perversions became the basis for sexual pathologists’ scientific interpretations and psychological analyses. As part of the formation and development of the discipline, the connection between sex and crime also played a central role in the scandals, injustices, and power struggles associated with sexual pathology in the early 20th century.

For more information and the complete program please visit: http://www.uni-muenster.de/Practices-of-Literature/aktuell/konferenzcrimesofpassion.html